The area known as Del Mar was populated by Indian inhabitants possibly dating back 50,000 years. The San Dieguito Indians were the most ancient inhabitants, believed to have come from southern Oregon by way of the Mojave Desert and Imperial County. At some point, the La Jolla Indians arrived, joining and then replacing the San Dieguitans about 7,500 years ago. And, finally within the last 1,500 years, the Diegueno Indians arrived from the desert lands to the east. The Dieguenos were the inhabitants Christianized by the Franciscan Fathers, and, as a result, they moved from the Del Mar area to the San Diego Mission area when it was founded in 1769.
Following the Mission era, the main part of Del Mar was granted to Don Juan Maria Osuna in 1840-1841 as part of the San Dieguito Ranch. After the completion of the railroads, several pioneer farming families were drawn to the area. William Weed was one of them, purchasing a large area of what is now Del Mar, and the area was named Weed in his honor until 1885, when it became known as Del Mar. The rancher considered to be the "father" of Del Mar was Colonel Jacob Shell Taylor, who purchased acreage with the intent of subdividing it, and built his "Casa Del Mar" to entice tourists and potential residents, and the town was born. It was not to last. A disastrous fire in January of 1890 destroyed Casa Del Mar, and the town went into decline.
In 1905, the formation of the South Coast Land Company, revived the town. The center of town moved from 9th and Stratford to Coast Highway and 15th. The South Coast Land Company built a new hotel, Tudor style at that location, which set off a new land boom. The South Coast Land Company also relocated the railroad and railway station and, with the help of, and in spite of, a colorful cast of characters, they planned to extend the Pacific Electric Railway to San Diego from Los Angeles through Del Mar. That plan fell through when Henry Huntington, one of the partners in South Coast Land Company, was thwarted by E. W. Harriman, head of Southern Pacific, when Harriman acquired 51% of Pacific Electric stock. Nevertheless, the small community continued to grow.

In the 1930's, the Depression affected Del Mar, as well as the rest of the country. However, in 1933, in spite of the grim times, the eight members of the 22nd Agricultural District had a vision for a county fairgrounds to be located in Del Mar, which set the town on its current path. These eight intrepid visionaries were successful in purchasing the current site with a $25,000 grant from the State Department of Fairs & Expositions and the first county fair was held in October 1936. Even before the first fair was held, it was felt that the addition of a racetrack to the fairgrounds would be an asset and would be self-supporting. 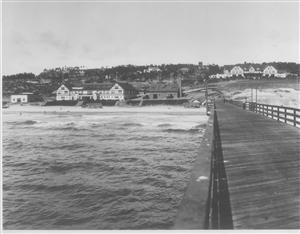 Because of the climate and the seclusion the area offered, film stars were frequent visitors to the area. Among them was Bing Crosby, who was a racing enthusiast, and he turned out to be instrumental in the development of the Del Mar Racetrack. He and the fair board agreed on a lease arrangement with the newly created Del Mar Turf Club for $35,000. Serving on the Turf Club's first Board of Directors was Bing Crosby as President, Pat O'Brien as Vice President, with Oliver Hardy, Joe E. Brown, Gary Cooper, Leo McCary and others serving on the executive boards. The initial funding met with repeated setbacks and Bing Crosby and Pat O'Brien put up personal loans against their own life insurance to the fair district without interest, at one point. When the Del Mar Racetrack opened on July 3, 1937, it enjoyed a very successful opening day.  The track enjoyed moderate success from its opening, but the race that put Del Mar on the map was a race pitting Seabiscuit, from Charles Howard's stable, against the best thoroughbred of the day, Ligaroti. Seabiscuit won and set a new record for the distance in that race.

The City of Del Mar maintains its small community charisma, even though millions of people enjoy coming to the San Diego County Fair and horse races at the Del Mar Racetrack and fairgrounds every year. Every summer, tourists come to enjoy the beautiful beaches of the Del Mar coastline. The area east of Del Mar is known as Carmel Valley, and the growth and development of the area is occurring there. Carmel Valley is a family-oriented community of green belts, parks and new schools.


(Research compiled from a variety of sources, including "Del Mar Decades: A History of Del Mar, California" by Elizabeth Whitfield Richards, published by Santa Fe Federal Savings in 1974.)